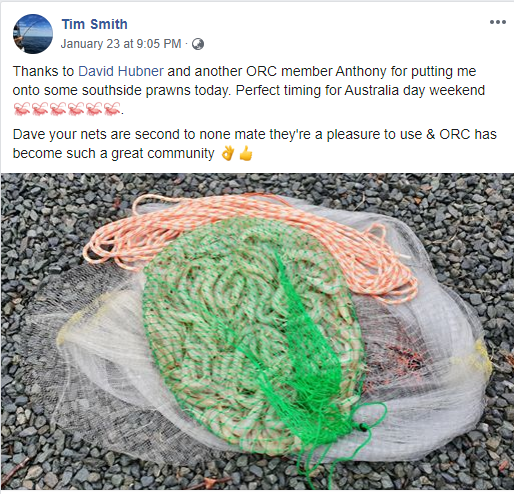 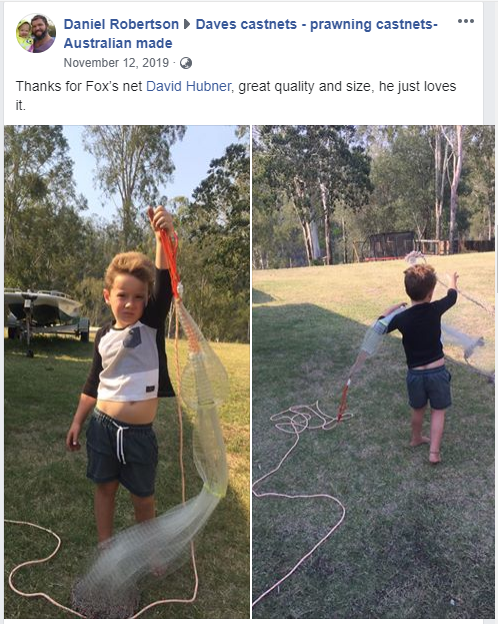 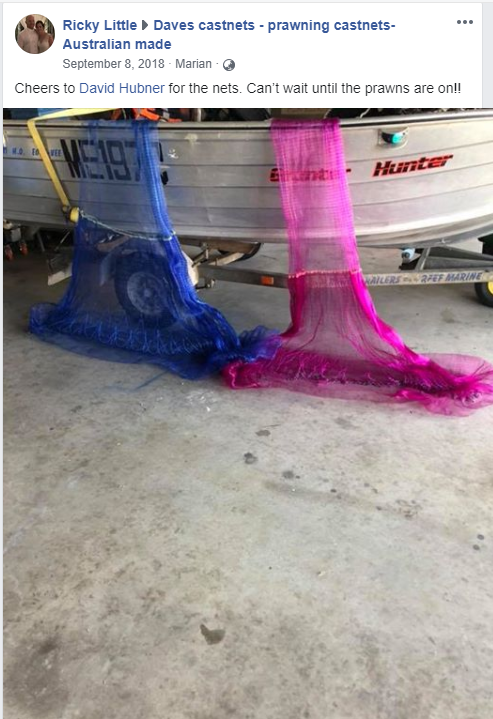 ​Hi Dave,
After 30 years of using custom made nets I’ve finally found the perfect one. At 70 years old I still enjoy getting out in boat and catching prawns and must say with this new net I can continue to do what I love. The performance of net is exceptional, easy to throw, well weighted and sinks fast. End result prawns in pocket every time. Will highly recommend.

Once again thanks Dave,
John.
November 2015

I bought a 12Ft chain bottom cast net off Dave a few years ago and it is easy to throw and use. As with all cast nets I ripped it when I caught some rocks on the bottom but Dave fixed it up as good as new. Very good bloke with a professional attitude. Totally recommend his nets.

Just a quick comment on the prawn nets for people who are thinking of buying one. Over the years I've tried a few custom made nets thinking they were good, that's until I discovered the nets that Dave makes. They are a better quality net , better in the materials he uses and a better finish over all, even down to the joining of the materials. But most of all they spread better than the other nets I've tried. If there are prawns around these nets will catch them.

Steve C.
October 2015
​
I recently purchased one of Dave's hand made prawn nets, as a beginner / novice I was unsure of what to look for and what suited me best, Dave was extremely helpful in advice and also technique - which is important when wanting that prawn net to open when they are on. Since obtaining the cast net you can see the quality and actions speak louder then words once you get out and casting. In my opinion I was after something more valve for money then what the likes of BCF had to offer, the help / advice I received and the success I have had with his cast net only cement using them was the right decision.

Dave's cast nets,
I have been throwing cast nets for over 28 years for bait and prawns.
I have used and thrown all different forms of nets from top pocket, to bottom pocket and even draw string.
The problem I have found with most cast nets are they have very springy nets and that they close as they sink. There are alot of cast nets that don't open fully.

Dave's cast nets are the best I have seen and used.
They are the easiest to throw,
They open and stay open when they sink,
The bell shaped net catches more prawns,
They have a larger top pocket to catch more prawns,
The double diamond mesh is stronger, softer and sinks better through the water column,
The chain bottom is secured stronger on the base of the net to stop tearing.
Catch your bucket of prawns quicker.

If you want to catch more prawns, you need one of Dave's cast nets. It's as simple as that.

Hi Dave
thanks for making me a quality net these are the best nets i have found by far they spread well catch well my catch rate improved out of site and the service and help you could not ask for better thanks again Dave.

I have been using Dave Hubner’s  nets for the past two years.
The design and workmanship of Daves nets is second to nun  I have no troubles casting full circles every cast and this give me a better catch rate

Hey mate,
I have 2 of Dave’s prawning nets and I have been very impressed with his attention to detail and build quality as well the their ability to catch prawns

If you are serious about catching prawns get one of these custom nets.
After you use one you will never be able to go back to a factory net again.
The way they work makes prawning fun.

i have use many nets over the past few years and have to say buy far its the best prawn net i have thrown!
these nets are of the highest hand made quality with not a stitch out of place.
so sleek, well balanced/ waited, i also love the extra large pocket and stream line design making it easy for the prawns get to the pocket.
can't recommend u enough

I have done more than my fair share of prawning in my time and I have used pretty much every style of net around but I have not changed since I've started using Dave's!! They spread better they are the best quality and I bag out every time.
Dave is always going above and beyond with service and advice on where the big bags of tasty critters are at!

Thanks Dave for custom making a 9’ top pocket cast net for my 10 year old son. Lucas and I had many hours of fun on the water this season competing for the biggest banana prawn, he almost pipped me once.

The 9’net is light enough for Lucas to throw and still holds its shape well when sinking. Like the standard nets you make the mesh is very flexible yet durable and the top pocket is easy to empty.We won’t let Lucas know his 12yr old sister caught a dozen prawns in one of her first ever throws with the custom made net. She drew proud smiles from me and a cheer or two from other boats around.

Thanks Dave, it was great to get prawning with the young kids this season and see them throw a net.